Note: Right before I published this, CHAZ changed its name to CHOP - Capitol Hill Occupied Protest. I'm going to leave the references to CHAZ in the original piece, but recognize the recent name change.

I live in Seattle - but in a different neighborhood than the one that's been making national headlines as an Autonomous Zone. Per this wikipedia article about CHAZ(Capitol Hill Autonomous Zone), after tension escalated between protestors and officers, the Seattle Police Department "retreated" from the East Precinct building in an act of good will to the protestors. This four-ish block zone has become known as CHAZ. There's been a lot of misinformation spreading about CHAZ - that there were large men with machine guns charging admission, or that local businesses were being shaken down, so I went to go check it out myself.

I'm going to start with my overall thoughts, share some photos and then go over some specifics.

Overall, there was nothing to fear. There were no weapons - just folks taking a peaceful stand. I was there on a Friday morning. In the 4 blocks and a park that make up CHAZ, there were -

Most businesses in the area were already closed due to Covid, and the businesses that were open were still in full operation. I saw a couple waiting outside a bagel shop for their order.

The Zone was lit up with artwork, starting with the enormous Black Lives Matter mural on the pavement. The police station was boarded up and covered in graffiti. Regardless of how this ends, I hope the art remains.

Most of the people at CHAZ were white. Seattle is 65% white and only 7% black, but there were still some vibes that CHAZ was a way for white folks to co-opt a black movement (more on this later). I also encountered an older white man who kept trying to vandalize the police station even further, with a black male in his 20s standing guard against his efforts.

Without further ado, here are some photos. 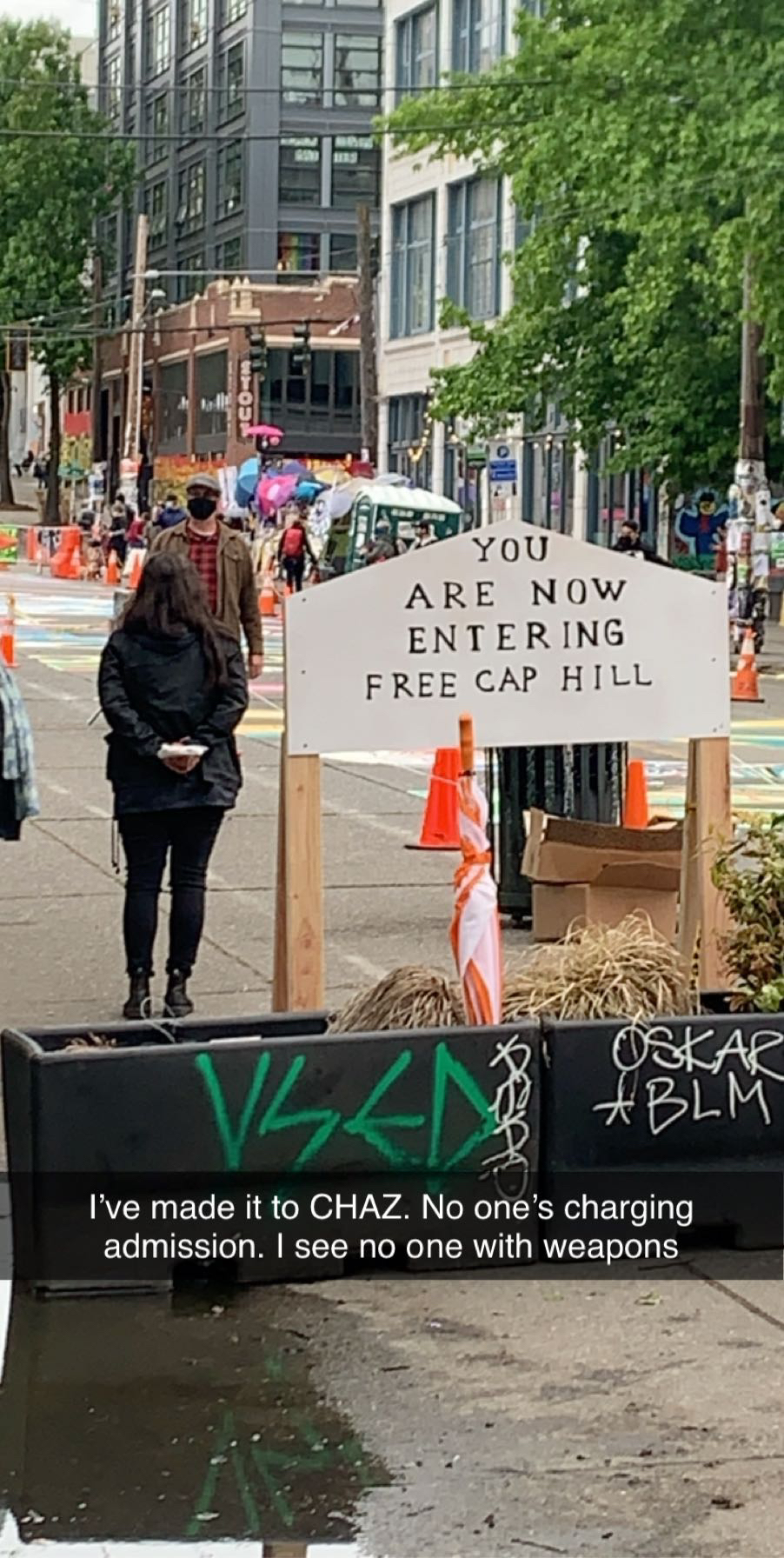 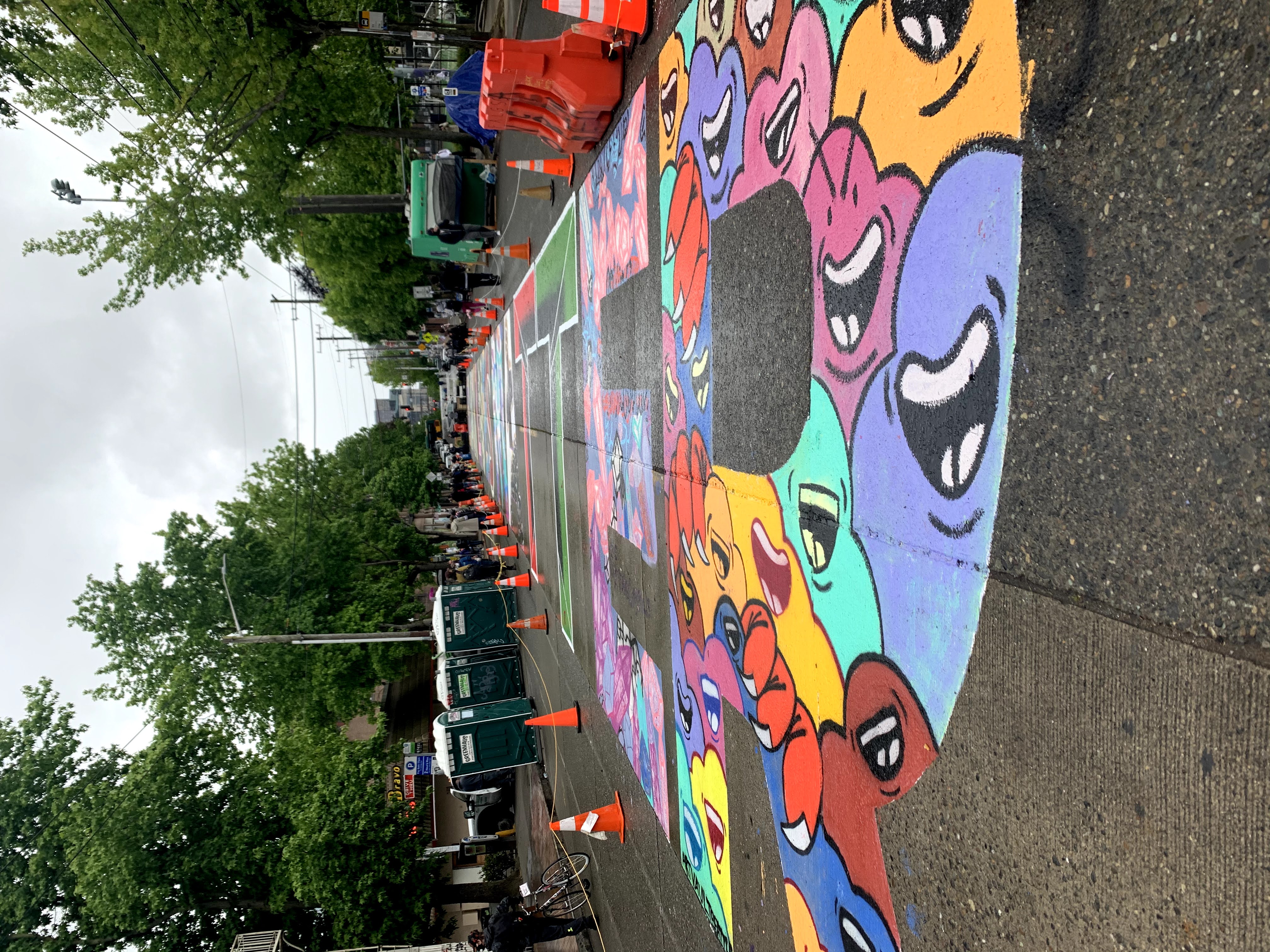 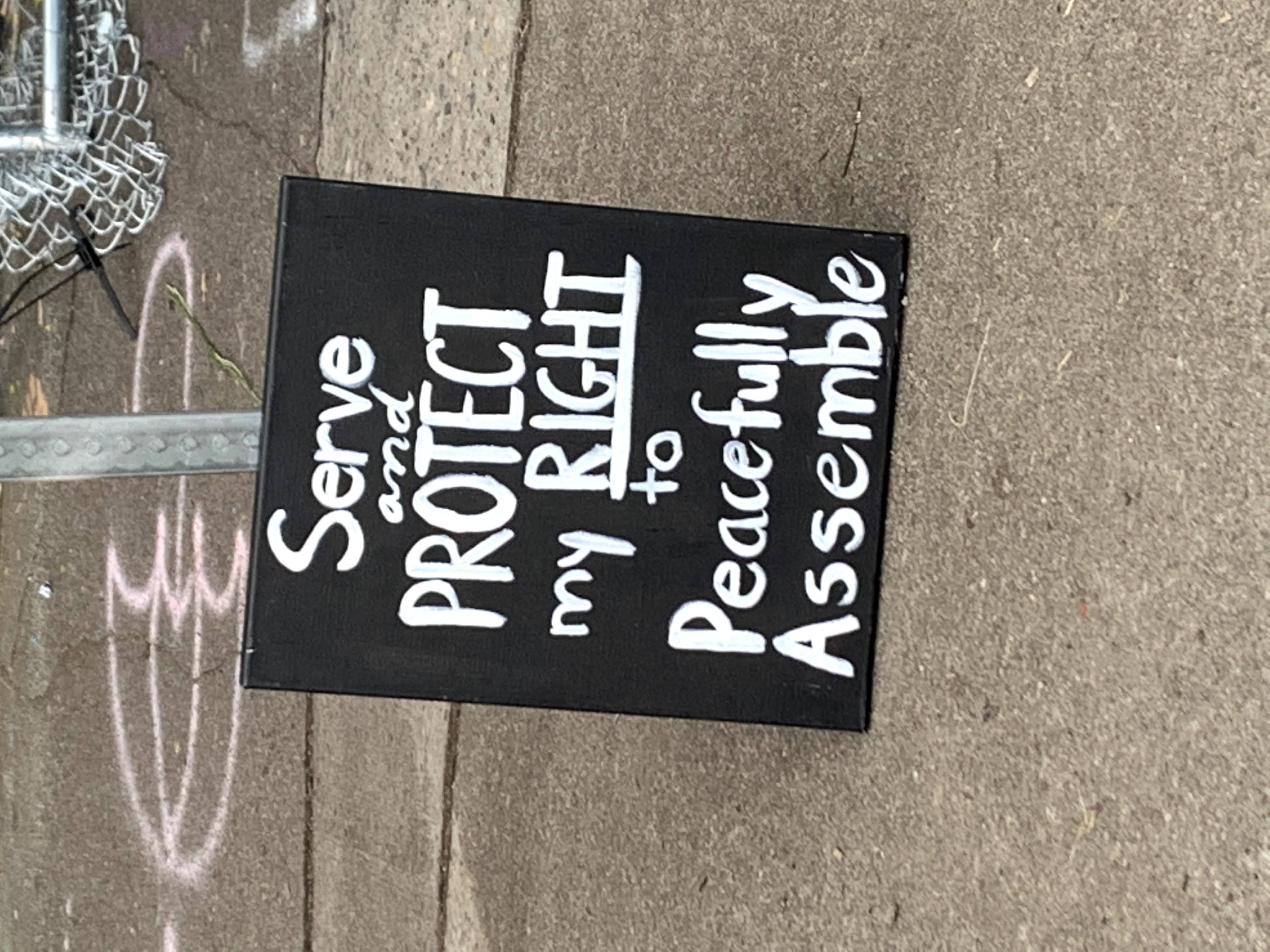 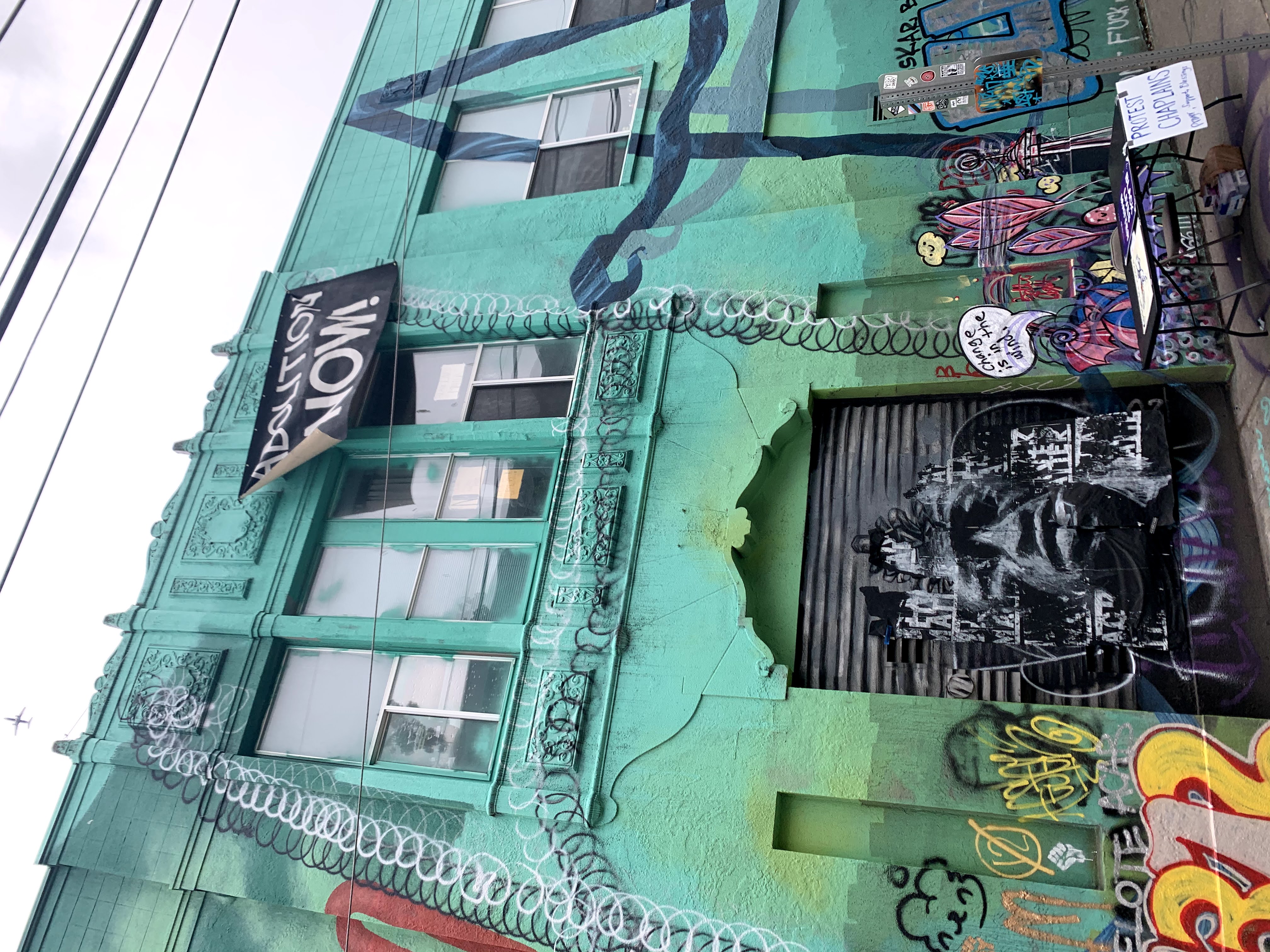 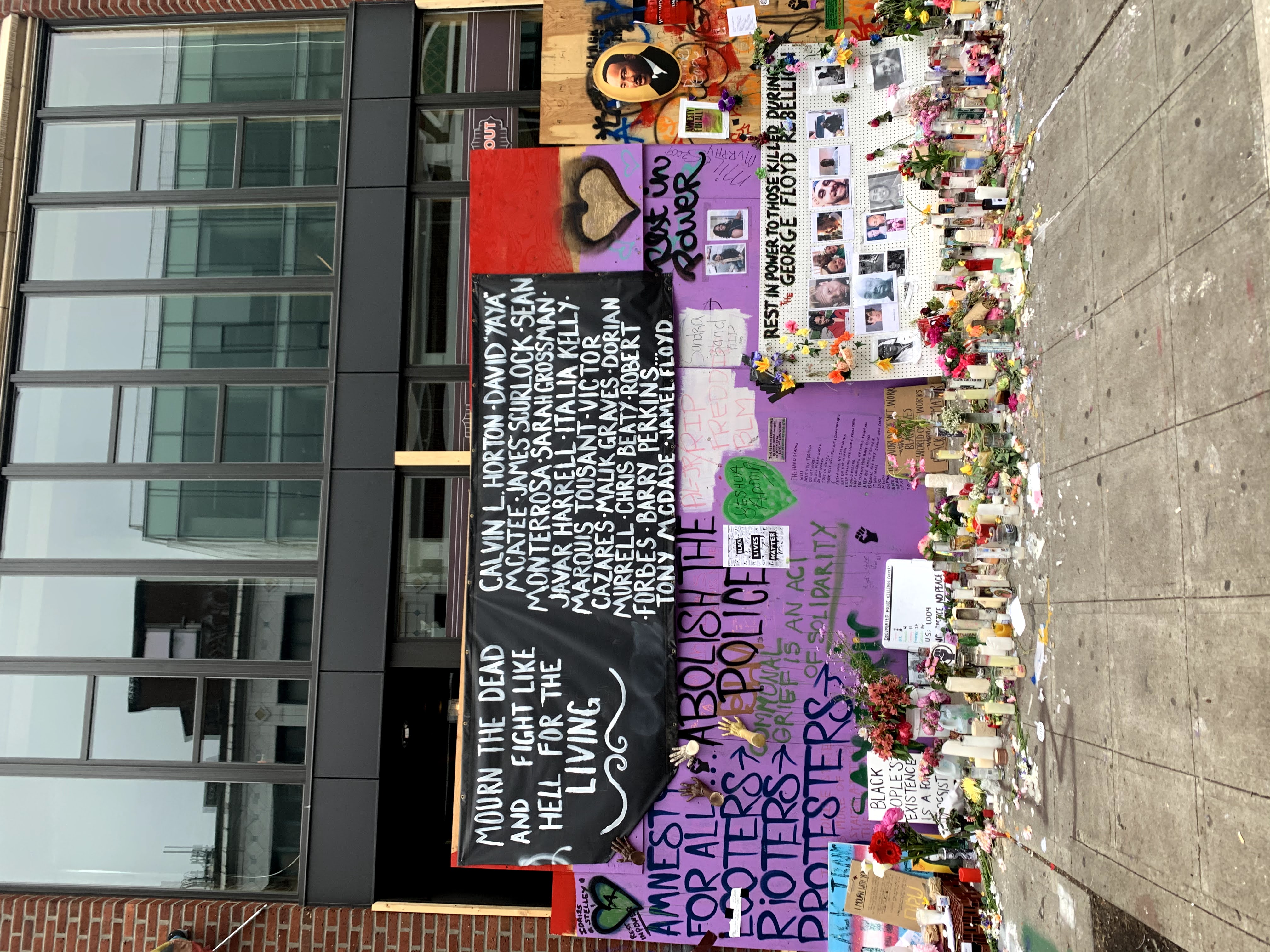 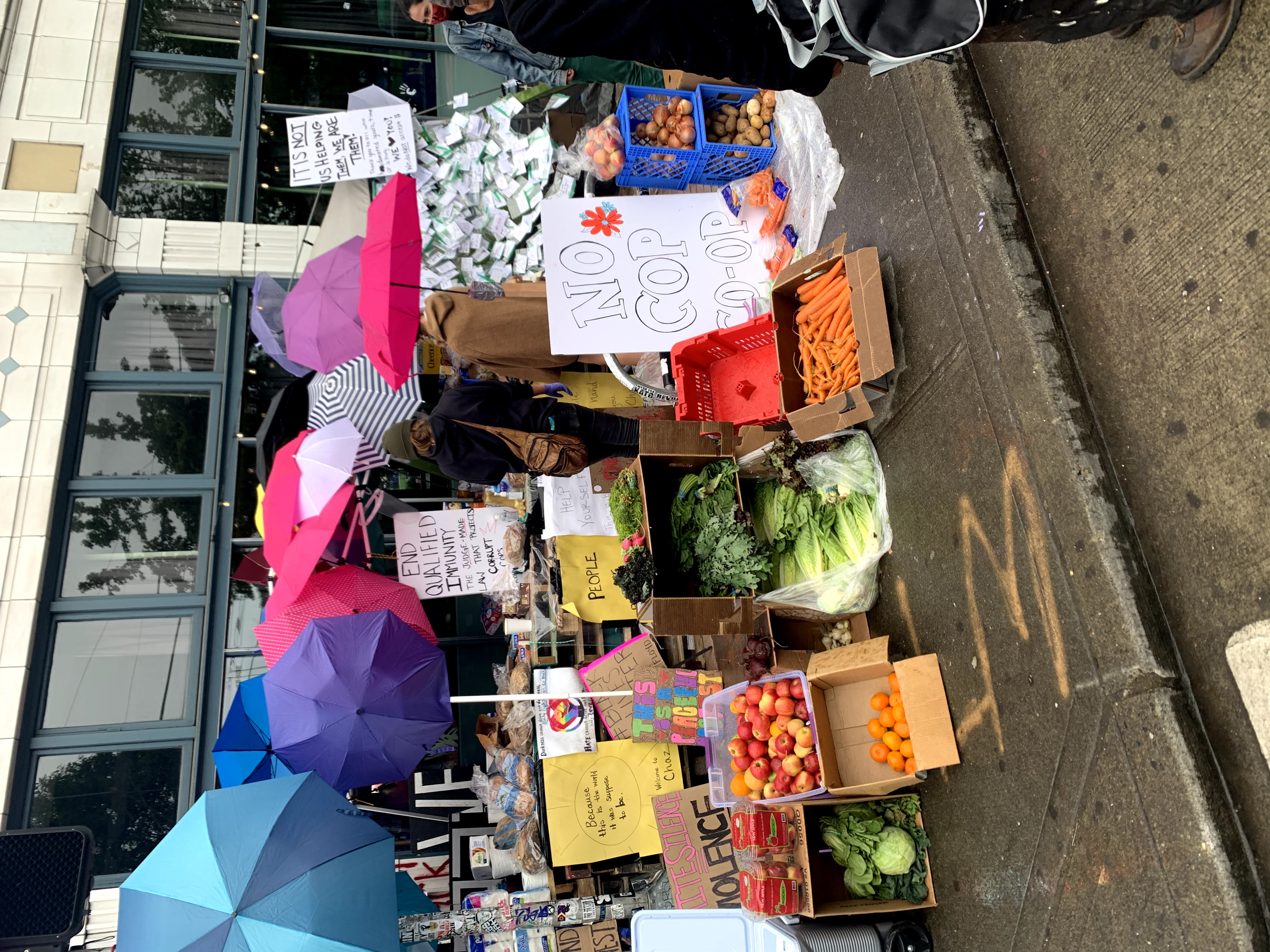 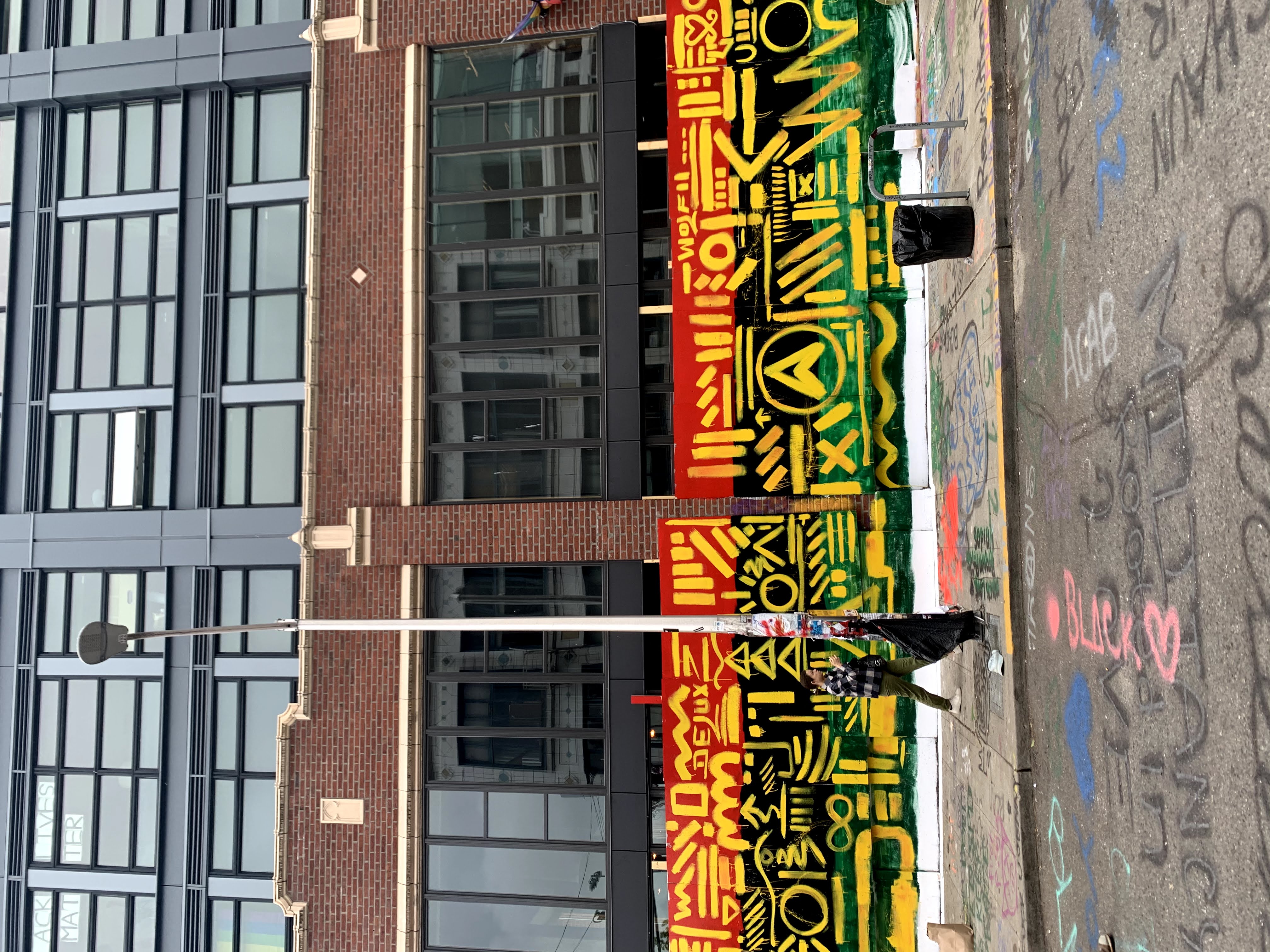 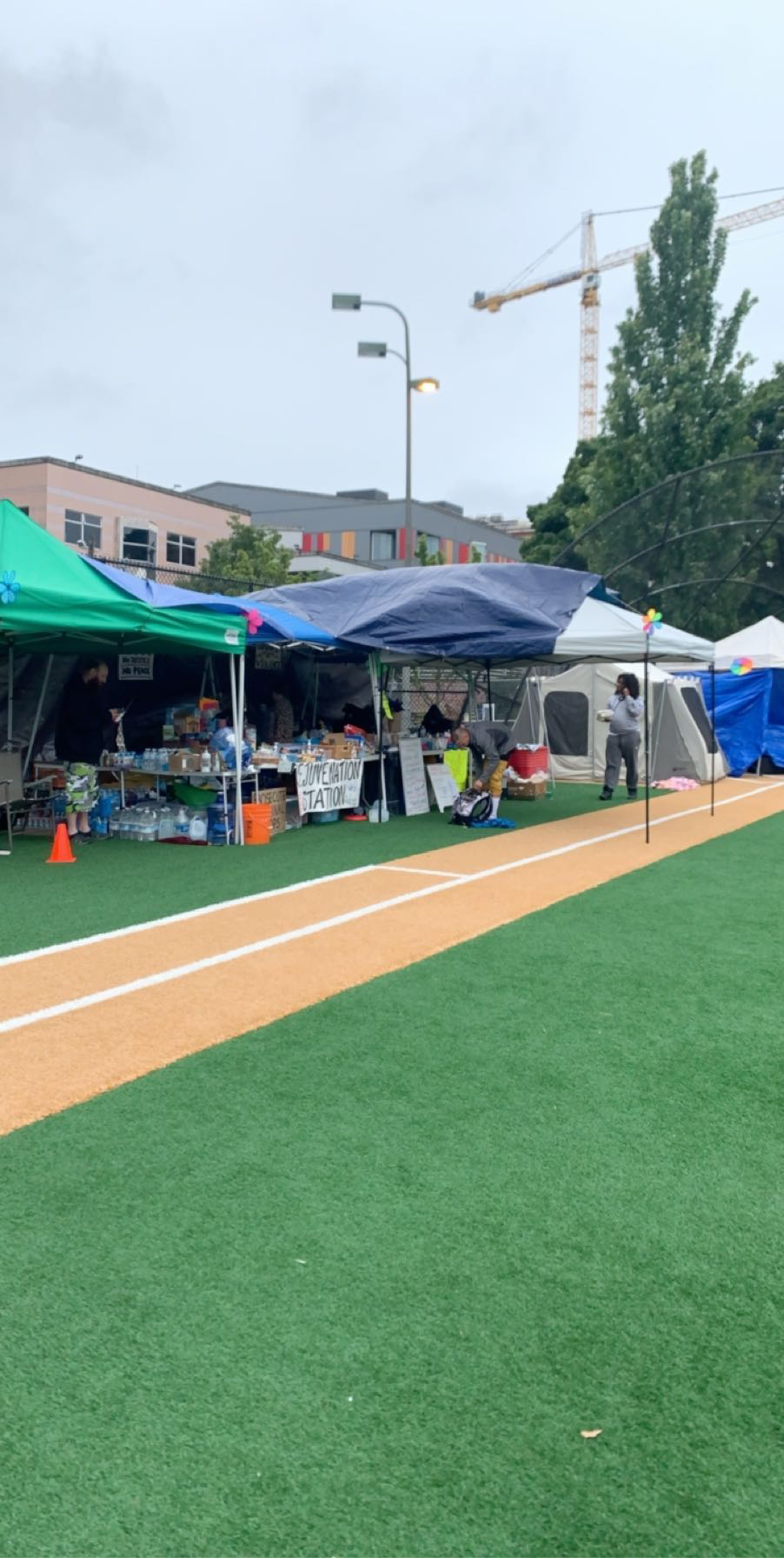 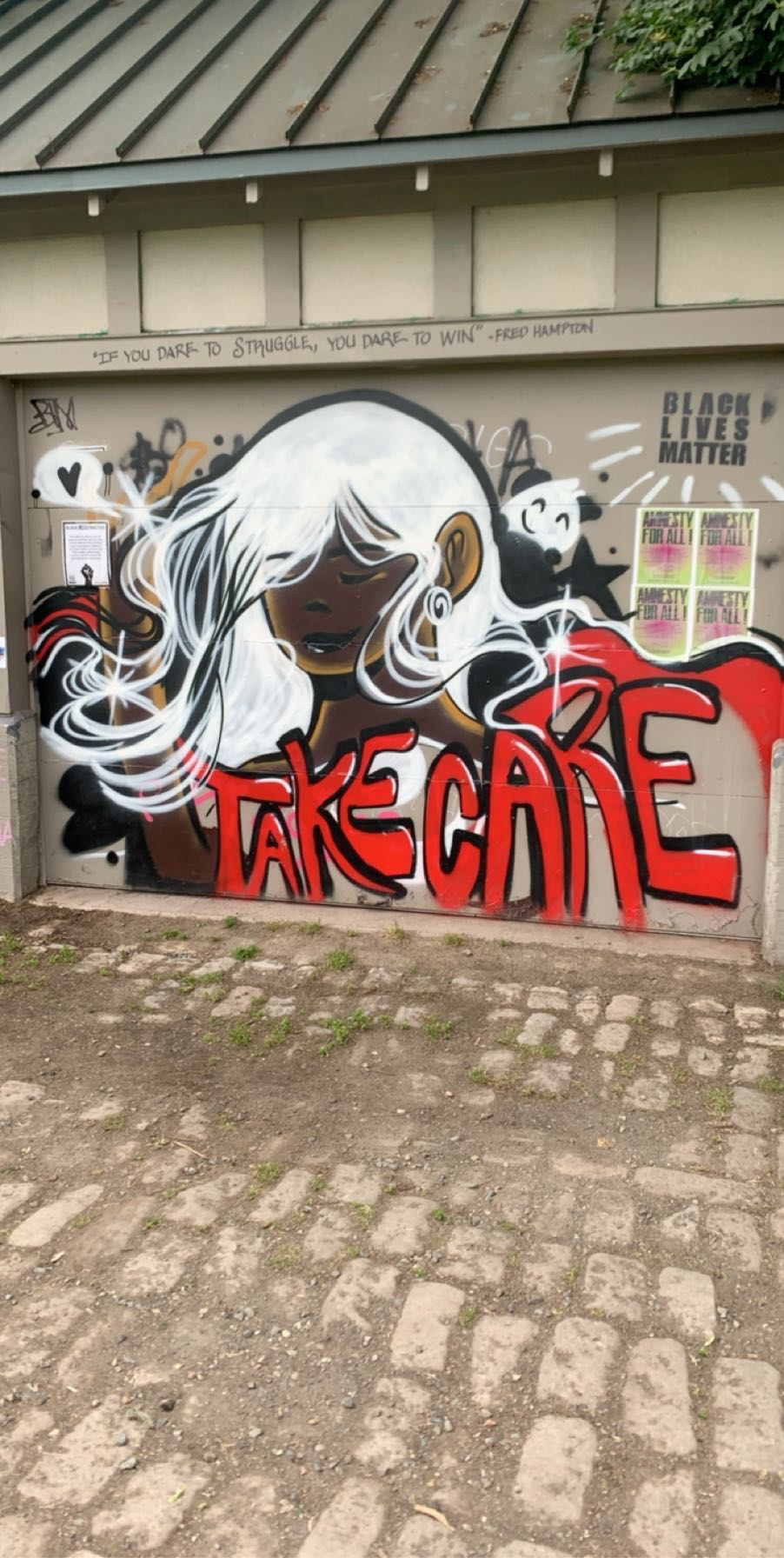 As for the Police Station - 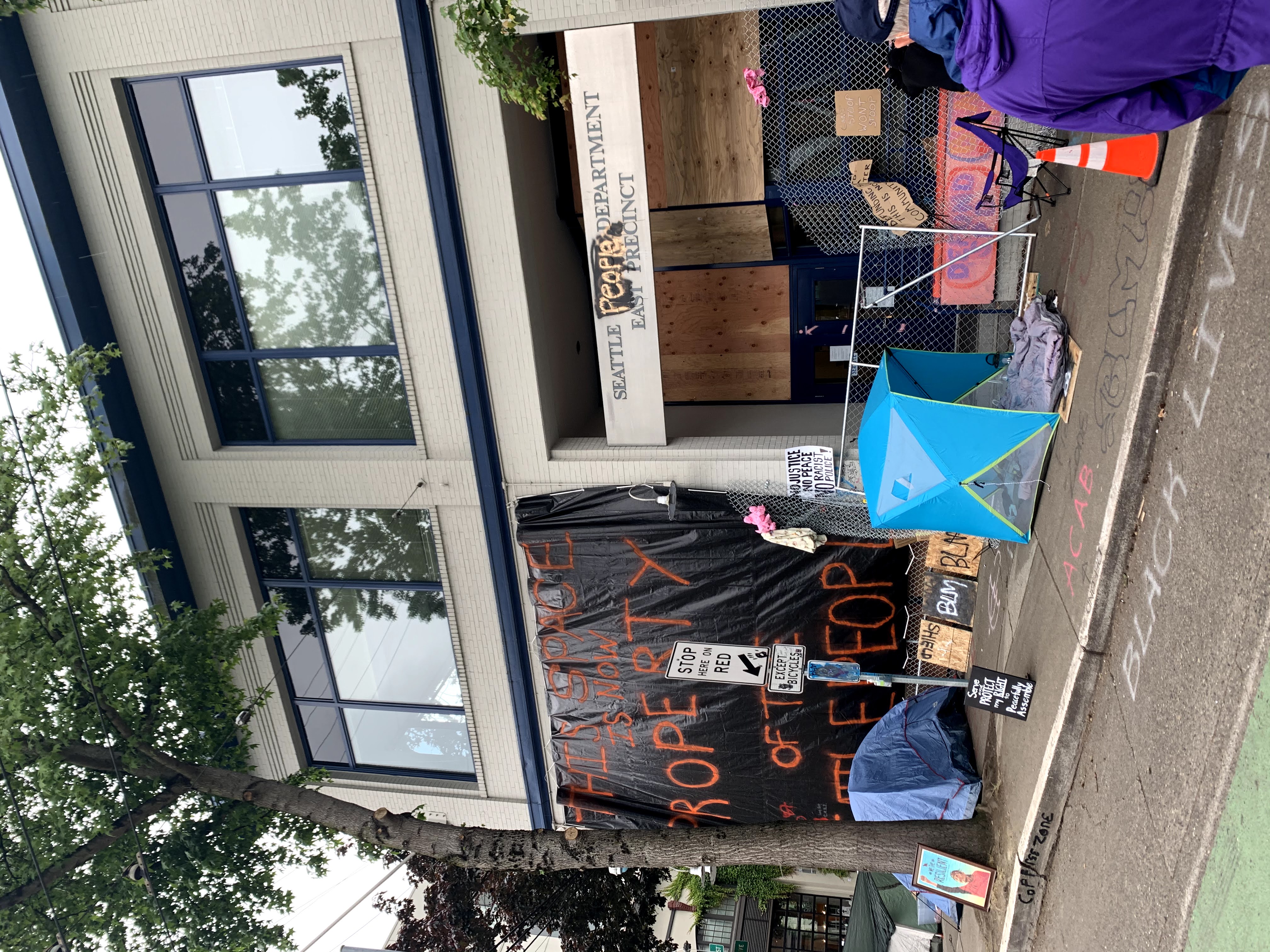 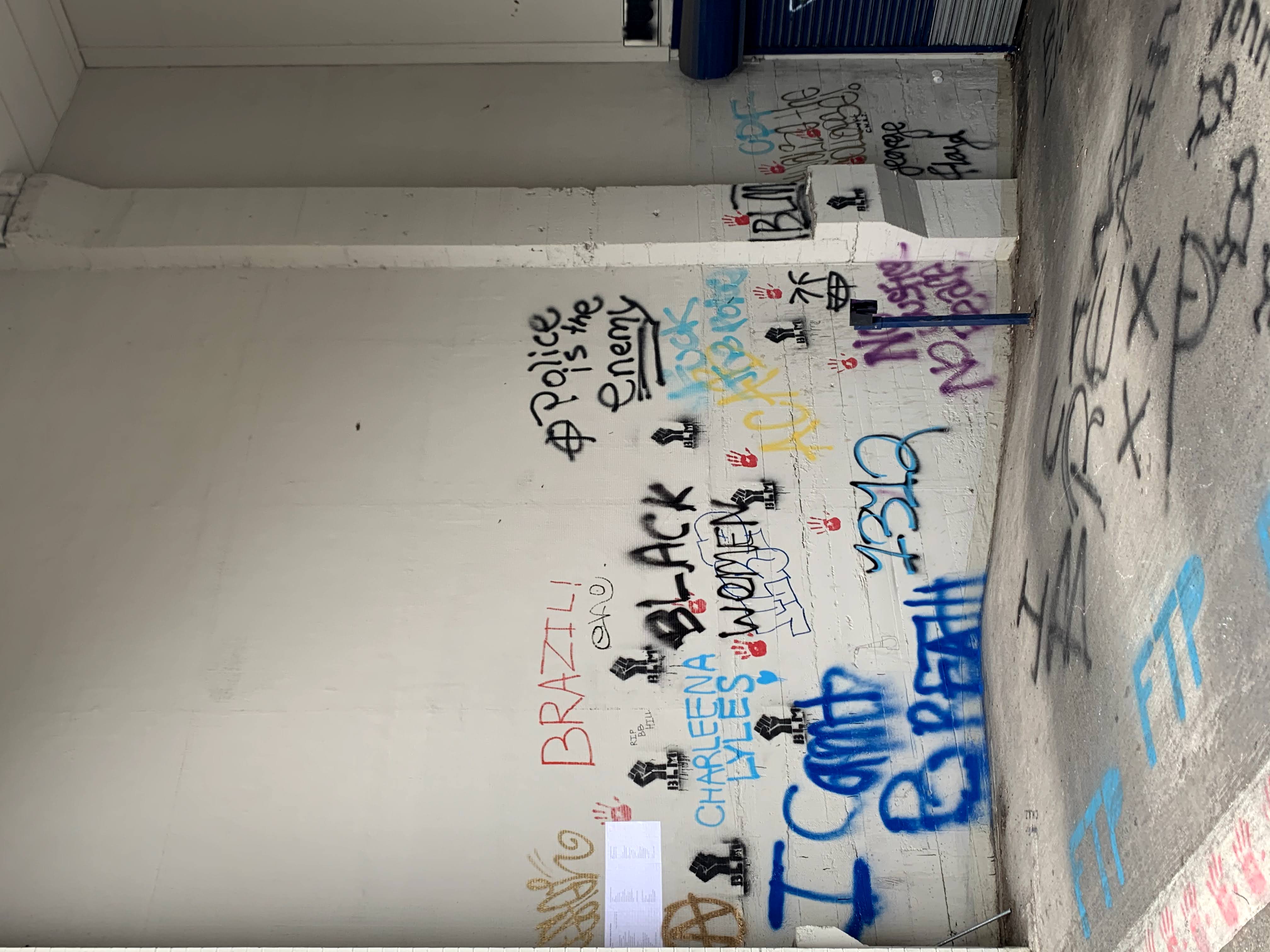 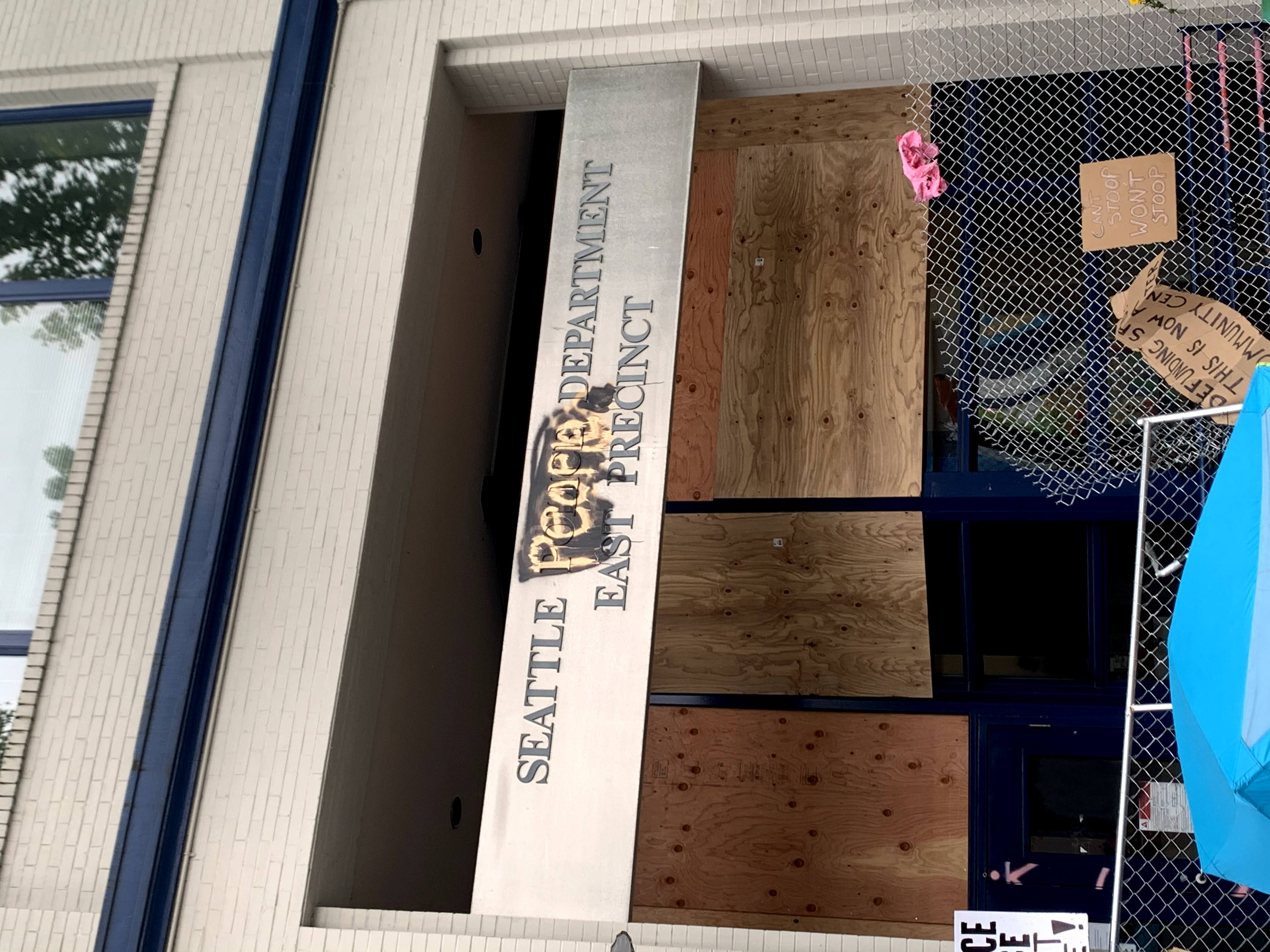 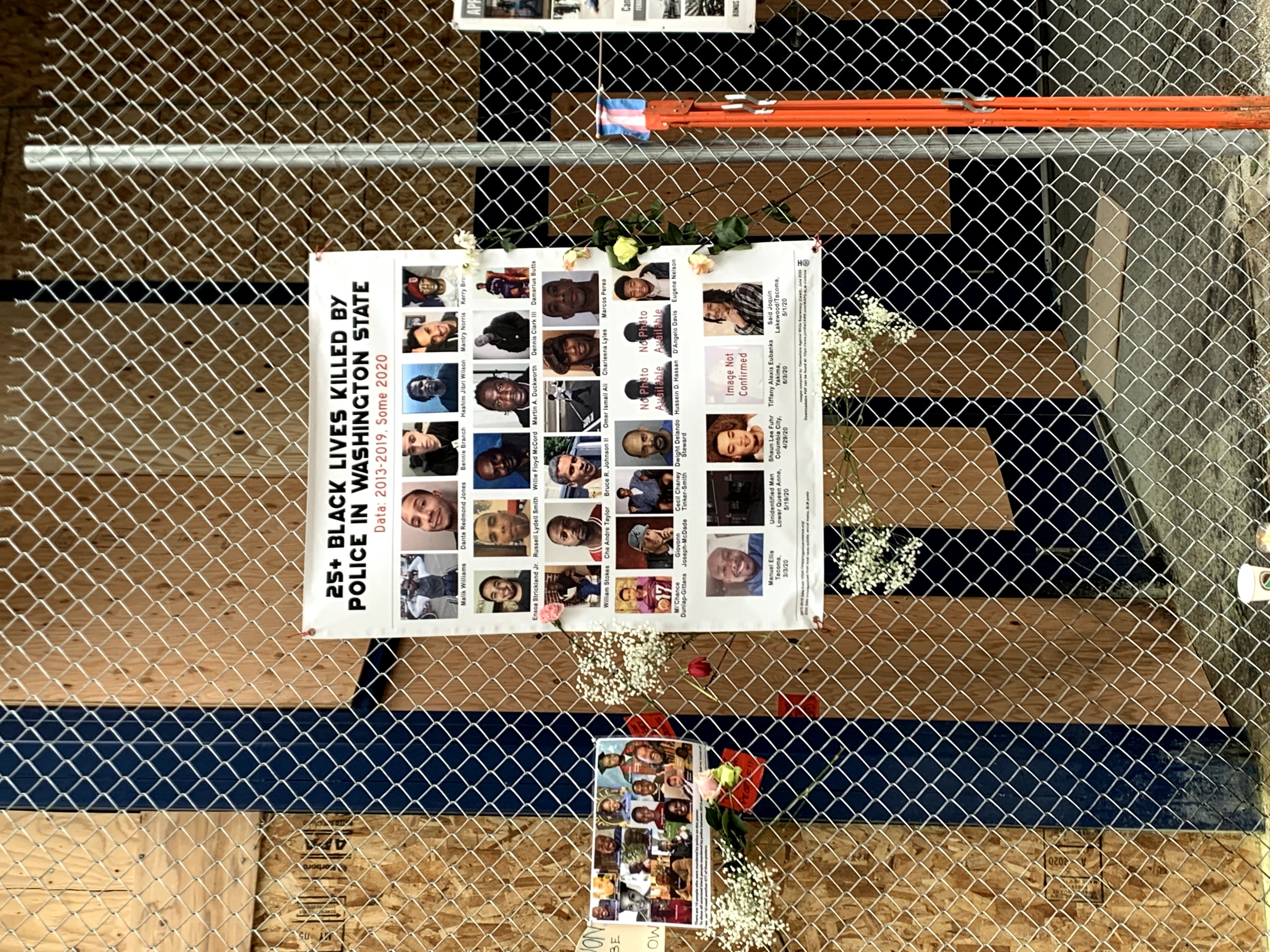 I bought a sausage from the sausage guy from Kenya, and we discussed the Swahili language. (asante sana means thank you very much in Swahali)

I then walked around taking photos, and overheard a conversation by one of the medical tents. There was a black woman asking the members of the medical tent - all white - who was in charge and what the demands were to tear down the CHAZ barriers. They responded along the lines of "There is no leader, no organizer. We are but medics. You'll have to talk to someone else about demands and organization, but remember, there is no leader." One of the guys was fairly rude.

I spoke with this woman after the conversation, indicating that I appreciated her inquiry of basically "now what?" for the CHAZ movement. It was also interesting to hear the opinion of a black woman at a zone organized (or not organized?) around the idea that Black Lives Matter.

I followed this woman in the direction of the No Cop Co-Op where she was going to ask similar questions when she stopped halfway to start up a conversation with a black volunteer in a tent outside the precinct. Here's the scene below - with blurred faces to respect their privacy. 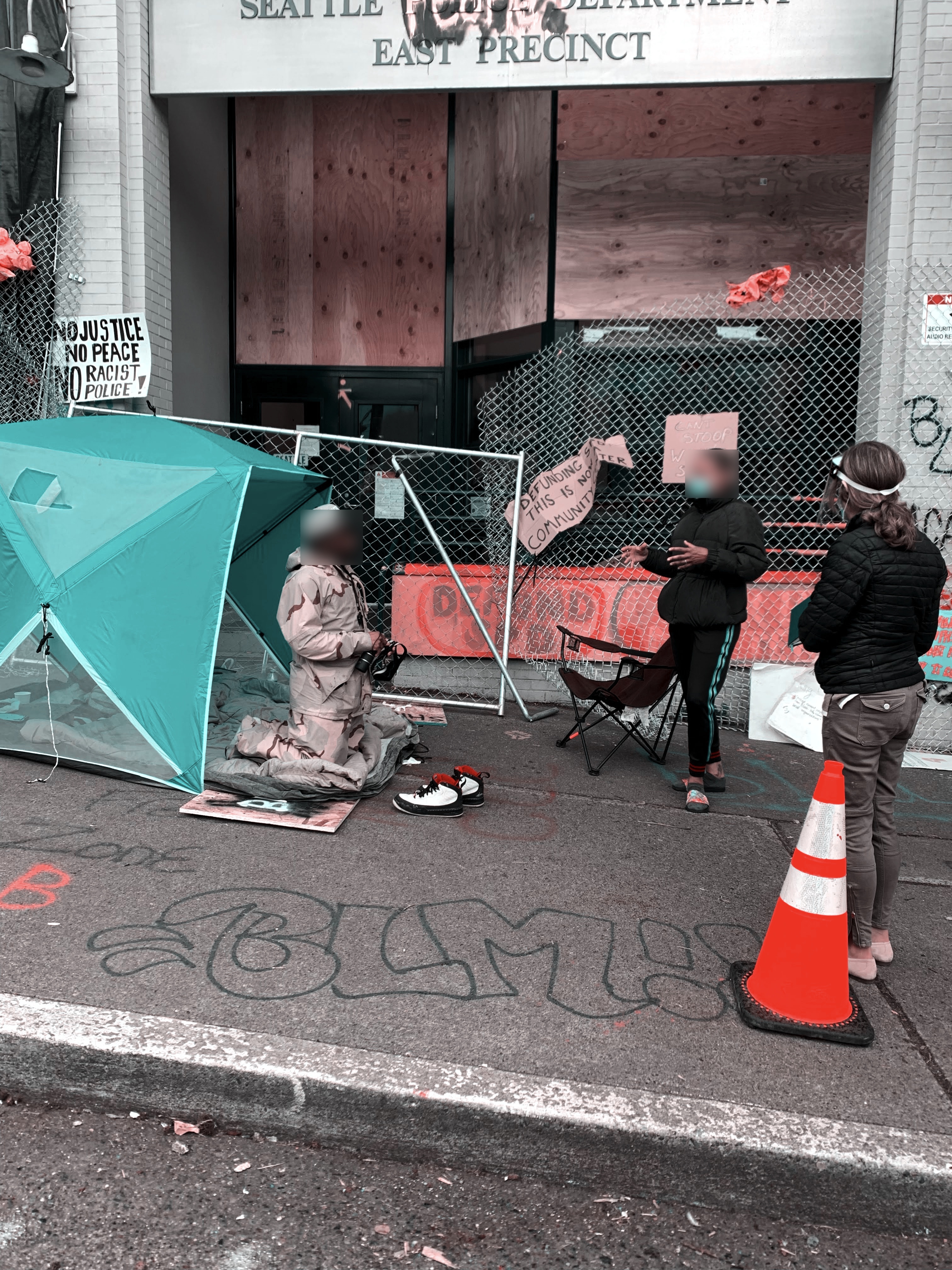 To make it easier to follow along, I'm going to call the black woman Shirley and the protestor James.

The conversation between the two more or less boiled down to -

Shirley indicated that she was in LA during the race riots and Johannesburg during the end of Apartheid. She argued that real progress would need to be made via identifying a list of demands, and was concerned that CHAZ appeared leaderless. She was also concerned that CHAZ was a distraction from the good work that BLM is doing, and that it was largely co-opted by white people. James argued that although there was no top-down leadership in place, moves were being made with people in power in Seattle - and that while the there were a ton of white people around at CHAZ, it was 11am on a Friday, and not indicative of the area during an organized protest.

At this point at small crowd had formed - all white - including an ally of the black community running for Congress, and an older gentleman who told me he "needed to spraypaint the windows of the police station black so when Trump orders the cops back, they can't see outside." Crazy Anarchist Man is an example of a white person co-opting the movement. I soon after learned that James was in his tent outside the precinct explicitly to play defense against Crazy Anarchist Man. When it was suggested "We need a leader to present demands" Crazy Anarchist Man responds that leaders were the problem.

A third black person showed up - we'll call him Jesse. Jesse appeared to be in his early 20s (but who can tell with the masks), and shared in the opinion that the whole CHAZ project was another example of white people running away with their movement. Pretty soon there must have been a crowd of at least ten white folks listening to these three black folks speak. At one point a white lady in the crowd cut off the black woman mid-sentence to say "I just want to let you know that I'm listening to you." completely missing the tragic irony of her statement. "I'm here so I can broaden my experience and bring it back to my racist family members."

Jesse responds "No disrespect but I don't need white people to like me. You can hate me as much as you want as long as I know my rights."

Shirley's main point was "We need to take down the barriers, as barriers represent what black people have been running up against for years. The barriers are offensive. Taking down the barriers should be seen as an olive branch to the Seattle police department to make meaningful change happen." James responded that he and other black protestors saw the barriers as necessary to keep the violent police out, and not as a reminder of their oppression.

Near the end of the conversation, Shirley pointed to a "BLM" tag behind a chain linked fence and indicated how awful of an image that was. A white guy in the crowd yells "Then let's replace it with art!" to which she responds "How will that help black people?"